A major electric utility in New England needed a backup control room and secondary data center to provide state-of-the-art resiliency to their customers. They called on BAW Architecture’s expertise.

The client is responsible for the safe, reliable and cost-effective transmission of electricity throughout much of New England. They needed a new, secondary facility and  data center control room for the purposes of providing enhanced grid resiliency. They called on BAW to design a backup control room and secondary data center.

The North American Electrical Resilience Corporation (NERC) provides guidelines for the performance criteria for the electric grid in the United States. These guidelines were formulated in the wake of the 2003 Northeast Blackout, an electrical outage that had devastating economic and even life-threatening consequences. That event exposed just how vulnerable the electrical grid actually was in many ways. NERC guidelines call for secondary backup facilities that can kick in instantaneously in the event of primary control facility failure.

The project incorporates state-of-the-art human factors engineering. It houses a central control room, a large, multipurpose conference room that can also serve as an emergency response center, and a secondary data center designed to collect, safeguard, and use transmission-related data critical to their business operations.

The new facility will incorporate energy efficiency and environmental sustainability principles, consistent with the company’s overall commitment to sustainability. Examples include using an HVAC system to comply with the highest indoor air quality standards; monitoring energy performance; use of low-flow plumbing fixtures; LED interior and exterior lighting to minimize night time light pollution; and a geo-exchange system that will reduce carbon-based heating and cooling demands. The south facing roof will maximize the incorporation of photo voltaic solar panels for on-site power generation. The architectural style is designed to feel at home in the rural New England landscape.

The backup facility must be extremely robust. It must be able to withstand a category F5 tornado and a category 4 hurricane. The control room is minimally manned, in a standby function; that is, until an emergency scenario compromises the primary facility, in which case it would swing into action. In that event, up to 100 people could immediately relocate to the backup facility, to man the controls in an effort to minimize disruption to the regional power grid to the fullest extent possible.

If this all seems a bit redundant, consider the situation in California in 2019. The Pacific Gas & Electric (PG&E) company’s outdated electrical distribution system had sparked fires in 2018 that decimated huge swathes of rural northern California. Without any reliable backup system, PG&E made the fateful decision in late summer of 2019 to cut power to millions of people throughout the state, simply because the electrical wires could not withstand winds exceeding 35 miles per hour. One can hardly argue that that was an acceptable “solution.” Proactively investing in a resilient grid makes more sense in light of such a situation, which plunged millions of people into darkness and cost untold billions of dollars in lost productivity.

This design is NERC-driven. Life safety—and in fact national security—is a cornerstone of any project involving the electrical power grid. Not only will this new facility  withstand major weather events such as hurricanes and tornadoes, it  has been designed from the operator outward to ensure the highest levels of situational awareness for the operators working within and it has been  discretely set back from adjacent roadways, and incorporates  various protection measures to prevent intrusion and enhance the security of the facility.

The backup control and secondary data center  will provide a complete, resilient and safe facility for this New England utility . To learn more about what our team can do to support your control building design needs, contact us. 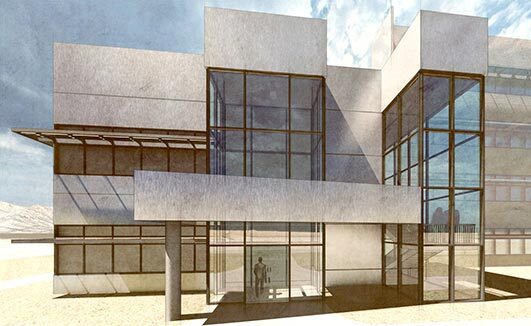 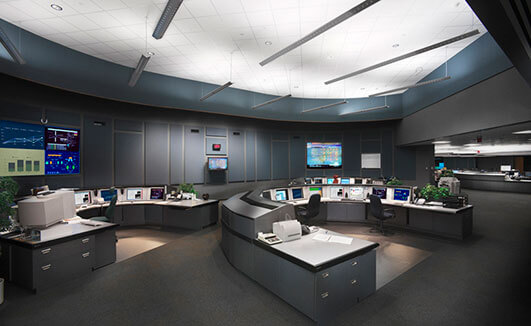