This famed facility is widely considered a modern architectural masterpiece. BAW Architecture was privileged to work on its renovation projects over the course of two decades. Strange though it may sound, it’s a story of leadership, optimism, patriotism, and a tribute to a father. 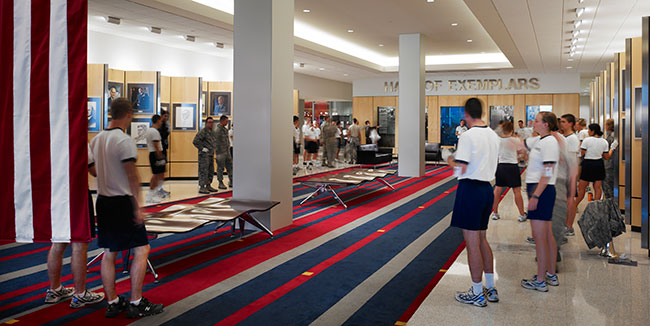 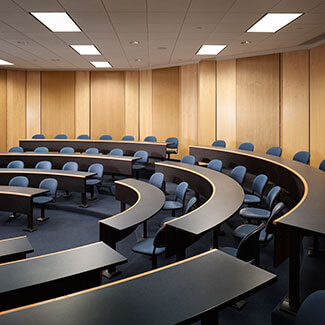 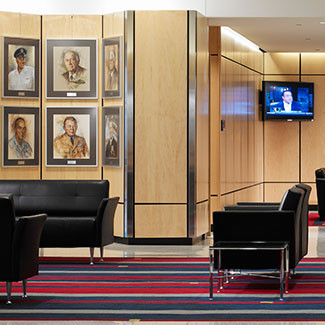 This project is best understood within the context of its historical significance, and therefore warrants a short retrospective.

When President John F. Kennedy gave the speech to the graduating class of the United States Air Force Academy in 1963 he secured its standing as an epicenter of optimism for America’s future, a physical embodiment of Kennedy’s New Frontier—a place from which “uncharted areas of science and space” could be explored. As Kennedy stood amidst the soaring architecture and spectacular cliffs with the next generation of military leaders, he challenged them to raise America’s eyes to the stars—quite literally—by advancing the space program. We were on our way to winning the space race, the sense of confidence was palpable, and the foothills of the Rocky Mountains out west were home to a high-water mark of modern architecture that captured the zeitgeist.

Kennedy was so impressed by this design jewel in the International Style, and by the potential of the Academy to further the goals of the U.S. space program, that he initiated legislation to increase the size of the Cadet Wing from 3,500 to 5,000 cadets. Following on this trajectory, by the early 1990s it was the largest academic facility under one roof in the free world. Subsequent renovations strove to incorporate the original architectural tenets of the International Style—light, taut, rectilinear forms with open interior spaces, composed primarily of glass and steel that liberates a building from the confines of rhythmic load-bearing columns to embody a weightless, airy quality.

Fairchild Hall, the main academic building that housed classrooms and lecture halls within its six stories, underwent an addition in the 1970s that solved the problem of additional needed space for a growing cadet class on a tight budget. Two decades later the Academy leadership saw an opportunity to further upgrade the building while incorporating the International Style that informs the rest of the campus, and called on BAW.

By the mid 1990s BAW had been working on various renovation projects at the Academy for a decade, and was therefore intimately familiar with each building in the complex, and had exhibited great reverence for the original architectural intent throughout their work. The choice was clear: BAW would design the second-generation renovation of Fairchild Hall, as much an honor and a privilege as it was an architectural challenge.

BAW seized the opportunity to release the true potential of Fairchild Hall by adding walls of glass to reveal the surrounding steep, rugged, powerful cliffs. The upper floor became a new cadet center. Light, open and airy, it was also repurposed to house the portraits of many influential American statesmen, pictures that had previously been hung at random throughout the campus. This Hall of Exemplars, as it was christened, now bears the likes of presidents Kennedy, Eisenhower and many other U.S. dignitaries.

Thanks in large part to conviction on the part of the Academy leadership—who saw an opportunity for creativity to take hold—an enduring legacy has been secured that transcends competence to embrace true vision.

What does it mean to answer that summons, to be a part of that American journey? My father, David Lee Walker (1922-2013) was part of the Greatest Generation, charged with defending freedom in its hours of greatest peril. He was from a family of modest means and had just begun attending college when his country called; he enlisted in the armed forces following the bombing of Pearl Harbor by Japan in 1941 to support the war effort, as so many of his generation did at the time. At 22 years of age he was stationed in the Philippines, where the Americans were in the final stages of a planned invasion of Japan. When the atomic bomb was dropped on Hiroshima, Japan remained defiant, and imminent invasion remained the strategy in place. How many men would have lost their lives had that scenario unfolded will remain forever in the realm of conjecture, as the course of history took a different turn when a second bomb was dropped on Nagasaki. My father became part of the peacekeeping mission in Japan following its surrender in 1945.

He returned home and completed his degree at the University of Oklahoma, then went to work for Exxon to support his young family. When the Korean War (1950-1953) broke out he was once again called to serve overseas.

I have not always been as patriotic as I am today. I was all too happy that I was too young to be drafted to serve in Vietnam. I didn’t want to have anything to do with the military. I wanted to study art and architecture, and thanks to my father’s sacrifice I was afforded that privilege. I gave speeches during college denouncing Exxon’s controversial 800-mile Trans-Alaska Pipeline (constructed 1975-1977). I drove my dad’s car to demonstrations against it being built. The irony was lost on me at the time, but not on him. He retired from Exxon in 1985 after more than 30 years as an executive at the company.

My father never talked about the wars—the suffering he had seen, what he had been through, what he had done—it was all vaulted away in his soul. Only in the twilight of his years did he begin to open up about what the wars had meant to him and his generation.

During this time my firm began the renovation projects at the United States Air Force Academy. I was honored to be working on this jewel of architecture, but funnily enough I didn’t countenance or appreciate the military aspects very much. My mind was on its lines, form and structure, not its reason for being. That began to change over time. Immersed in the physical form of this institution and surrounded by a young generation of men and women who had answered the call of their country, my perspective began to shift.

Over the years, as my conversations with my father continued, it began to dawn on me what he and his generation had contributed to our country, what they had defended. He put his life on the line so that I, his son, could live in freedom, pursue my chosen path, study architecture, build my own business, employ people, and add my own line to the continuing story of America. It has taken me most of life to come to an understanding of that simple yet profound truth.

I wrote my father’s eulogy when he passed away. He was an example of all that is great about this country. I am in awe of what he did, of what his peers did. They paid the price and bore the burden to assure the survival of freedom and liberty for generations to come.

And I thank them for their sacrifice. 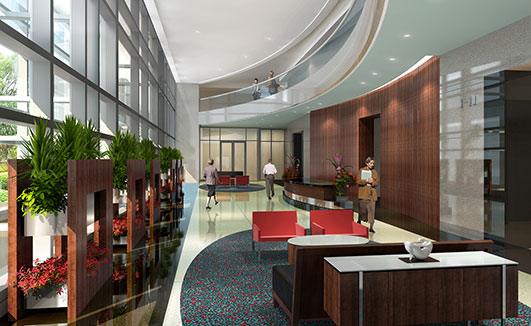 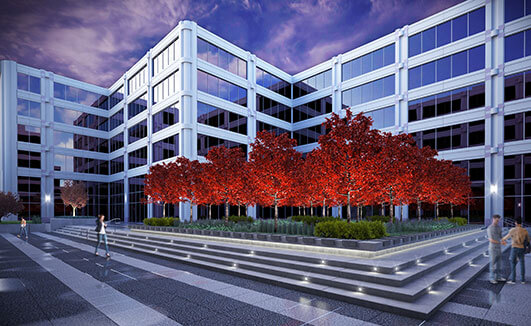 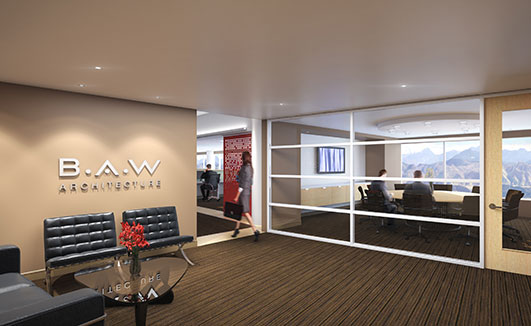